Already the 11th edition of FOR FISHING 2020 trade fair took part at PVA EXPO PRAGUE during 20 – 23 February 2020. Halls were bursting at the seams during all  exhibiton days. As Jakub Vagner mentioned during the opening ceremony – FOR FISHING is one of Europe's top fishing fairs! And this is confirmed by the statistics of FOR FISHING 2020:

We hope everyone enjoyed the atmosphere of this great show!

Thank you a lot to all exhibitors, partners and visitors.

GRAND PRIX at FOR FISHING 2020

A traditional part of the FOR FISHING Trade Fair was the GRAND PRIX competition this year as well. Altogether 24 exhibits were registered in the competition for the Best News of the Year award. The Expert Jury granted the awards in the following categories:

CARP FISHING TECHNIQUE: to the firm Lukáš Krása for the product known as “LK BAITS NUTRIGO ”

CATEGORY MATTER OF INTEREST OF THE TRADE FAIR: to the firm MOSS.SK, s.r.o. for the mat used under fish “Delphin DuoMAT”

The FOR FISHING Trade Fair appreciated the most impressive expositions of the event with the TOP EXPO award: 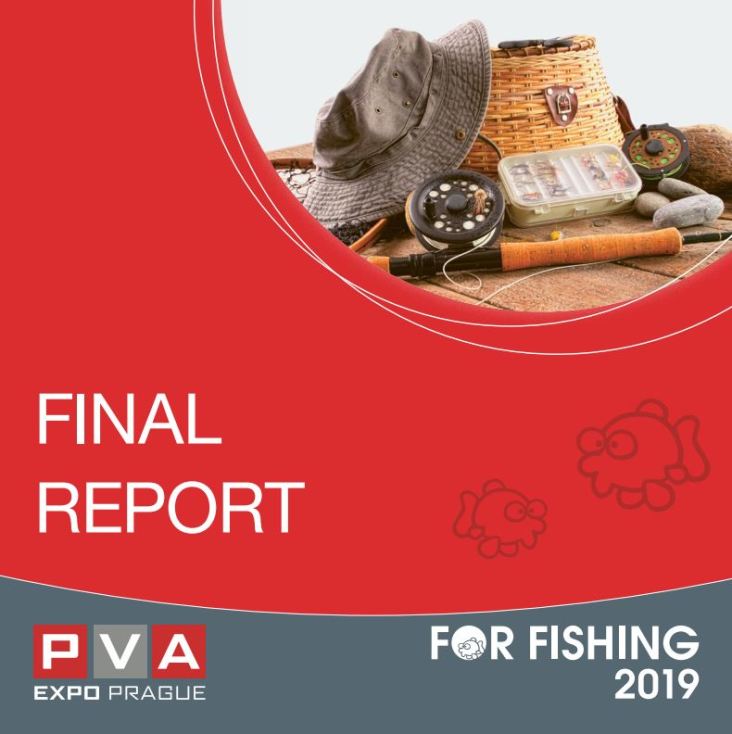 Flashback to FOR FISHING 2019 – GRAND PRIX and TOP EXPO winners

A traditional part of the FOR FISHING Trade Fair was the GRAND PRIX competition this year as well. Altogether 26 exhibits were registered in the competition for the Best News of the Year award. The Expert Jury selected 6 exhibits and granted them the awards in thefollowing categories:

FEEDER FISHING TECHNIQUE or FLOAT FISHING: to the firm Chytil - Ludmila Šustrová for the product known as “KORUM River Tripod”,

CATFISH FISHING TECHNIQUE or SEA FISHING: to the firm NaPřívlač s.r.o. for the product known as “Catfish Spool – ZECK HR20”,

MATTER OF INTEREST OF THE TRADE FAIR: firm MOSS.SK, s.r.o. for the product known as “Patented Camouflage – CARPATH Fish Model”.

The MAIN AWARD OF THE TRADE FAIR was granted to the firm Karel Nikl s.r.o. for the product known as “Feeding rocket Nikl – Spider Spod”.

The FOR FISHING Trade Fair appreciated the most impressive expositions of the event with the TOP EXPO award. The jury consisting of Tomáš Kotrč, MBA – Chief Executive Officer of ABF, a.s.; Michal Sedláček– SPORT Business Team Director; and Jan Trnka, DiS. – Director of the Technical Department of ABF, a.s., was selecting altogether from 199 expositions.

Pre-sale of the tickets to the FOR FISHING 2020 - catch your discount!

Do you want to avoid the waiting in a long queue or do you want to give a nice Christmast present to your beloved person? Ticket to FOR FISHING 2020 can be bought now for discounted price!

Hurry up! Book your place at FOR FISHING 2020 now!

Most of exhibitors have already booked their placement within the fair and we can be pride of the fact that most of them enlarge their exhibition space! Again, you can enjoy live stream on FRIDAY, lectures on interesting topics or news from fishing world within the FOR FISHING 2020.

AQUA-DEMO aquarium and famous czech and foreign fishing stars will be there as well! The fair will be held in the halls n. 2, 3, 4, 5 and 6. There is still available exhibition space waiting for you! We can offer you a shell scheme constructions or individually designed stands according to your requests. Furthermore we can offer you a promotoin of your company or other related services.

FOR FISHING 2019 took place at PVA EXPO PRAGUE during 14 – 17 February 2019. Once again, during the opening ceremony the trade fair was named as the largest fishing fair in Europe by Jakub Vagner. Four halls of PVA EXPO offered 16 005 m2 of the exhibition area and 202 exhibitors, not only from the Czech Republic, but also from 12 countries.

We would like to thank to all exhibitors, partners and visitors as well. Right now we are working on the 11th edition of FOR FISHING 2020!

Looking forward to seeing you in Prague!

Steve Briggs and fishermen from 12 european countries presented at FOR FISHING 2019.

The 10th edition of largest fishing trade fair in Europe has just started. More than 200 exhibitors from 12 countries presents their products at PVA EXPO PRAGUE till Sunday 17th February. Within the accompanying program you can look forward to many fishing celebrities, e.g. Steve Briggs from England who gives the lecture on Saturday.  Moreover, there is also AQUA DEMO, a huge glass aquarium, in hall n.5 where lectures of various companies are running every day. Do not hesitate to visit us!

Steve Briggs and fishermen from 12 european countries presented at FOR FISHING 2019.

The 10th edition of largest fishing trade fair in Europe has just started. More than 200 exhibitors from 12 countries presents their products at PVA EXPO PRAGUE till Sunday 17th February. Within the accompanying program you can look forward to many fishing celebrities, e.g. Steve Briggs from England who gives the lecture on Saturday.  Moreover, there is also AQUA DEMO, a huge glass aquarium, in hall n.5 where lectures of various companies are running every day. Do not hesitate to visit us!

The preparations for the FOR FISHING 2019 trade fair are in full swing!

The 10th anniversary of the largest fishing trade fair in the Czech Republic is held on 14-17 February 2019 in the exhibition venue PVA EXPO PRAGUE in Letnany in the halls n. 2, 3, 4 and 5. Within the anniversary we are preparing a lot of innovations and news that you will be informed about soon. The great news for the lovers of spin fishing is that a huge aquarium AQUA-DEMO will be at the fair again in 2019 and the presentations of the companies will take place there every day!

Although the offer for the publication of the data in the catalog is presented as free of charge, after completing and submitting the data, the client will receive an invoice for the payment of almost EUR 1200 per year.

Furthermore, ABF, a.s. declares that it has never granted the mentioned companies permission to use or promote the protected names or logos of trade fairs organized by ABF, a. s. and to address individual exhibitors on behalf of the organizer of the fair.

PVA EXPO PRAGUE hosted already the 9th edition of FOR FISHING trade fair from 15 to 18 February 2018. During the opening cerremony Jakub Vagner highlighted FOR FISHING as the largest fishing trade fair in Europe.  About 203 exhibitors were presenting on the area of 16 051 m2 in 5 halls of PVA EXPO PRAGUE. Not only czech companies, but also 30 exhibitors from 12 countries were exhibiting at FOR FISHING.  33 343 guests visited the trade fair during 4 days, i.e.  increase by 7 % in comparison with 2017. Many thanks to all involved – the exhibitors, the partners and the visitors. Right now we start working on the upcoming 10th anniversary of FOR FISHING that promises something more!

The most impressive expositions of the FOR FISHING 2018 trade fair were appraised. The jury was compossed of Tomáš Kotrč, MBA – Chief executive Officer of ABF, a.s., Michal Sedláček – Director of Sports business team and Jan Trnka, Dis. – Director of Technical Department. The jury had to choose from 202 expositions. TOP EXPO award up to 49 m² won the company DRAGON BAITS, TOP EXPO award from 50 up to 99 m² won the company FLAGMAN. FISH-PRO was awarded TOP EXPO for the exposition more than 99 m². Congratulation to the winners!

The 9th edition of FOR FISHING 2018 starts  on Thursday 15 February 2018. There will be 201 exhibitiors presenting  from 12 countries on the exhibition area of 16 000 m2.  You  might enjoy the largest fishing trade fair and meet famous fishing personalities till Sunday 18 February 2018 in PVA EXPO PRAGUE.

World Carp Masters at For Fishing 2018

Pre-sale of the tickets to the FOR FISHING 2018 has just started!

The visitors of the FOR FISHING 2018 have the possibility to buy the tickets now! You can avoid the waiting in the long queue or you can  give the tickets as a Christmas present to your friends, now on discounted price! The tickets can be bought at http://forfishing.cz/koupit

The FOR FISHING team has already started prepare the 9th FOR FISHING trade fair. We are now in the process of addressing the participants from last year and offering them a space for 2018. However, we already accept applications from new exhibitors as well, to whom we also offer discounted prices if they apply early. We believe that the 2018 FOR FISHING will be record-breaking again, in particular we hope to further support the trend of foreign participation of companies abroad, making the event even more international.

Our aim is to move the already high reputation of the trade fair a little bit higher again.

You are now able to download the detailed FINAL REPORT 2017 that covers the 8th FOR FISHING, which was historically the biggest fishing exhibition in the Czech Republic. In 2018, we have a lot of new stuff prepared for you and we believe that the 9th FOR FISHING will break another record in terms of exhibitors, exhibition area as well as the number of visitors. To view the 2017 Final Report, click here.

Fair FOR FISHING 2017 is finished

Thank you for your participation and cooperation at the 8th fair FOR FISHING. This year's fair participated:
31,073 visitors
181 exhibitors
12 states

We firmly believe that the next year will be as successful as this year!

Competition for the best product / innovation

This year 17 exhibits participated in the competition GRAND PRIX which was judged by a professional jury consisting of Tomas Kotrč - CEO of ABF, a.s. and Michal Sedláček - Manager of FOR FISHING. The jury eventually agreed and awarded 4 exhibits in the categories:

CARPZILLA visited FOR FISHING to make a video

The legendary German carp-fishing and filming crew CARPZILLA arrived in Prague to make a video about FOR FISHING. The crew visited the stands of FOX, Nash, Carp Killers, and many more, and interviewed some of the stars that are at the show, including Alain Blair, Jakub Vagner, Martin Locke or Meik Pyka. We are happy to have these cool guys at our show. Check them out at: http://www.carpzilla.de

The largest fishing fair in the Czech Republic and the fourth largest fishing fair in Europe  opened the fishing season in the exhibition PVA EXPO PRAGUE for the 8th time. The Fair will run until Sunday 19. 2. and will present nearly two hundred companies. The event will host many interesting personalities from the world of fishing. Visitors will be able to see the famous fisherman, traveller and adventurer Jakub Vágner, known Josef Konopásek, Karel Nikl, world champion in catching carp and many others. On Thursday and Friday is open from 10 to 18 . On Saturday and Sunday the exhibition opens an hour earlier. On Sunday the event ends at 17. More information about the fairs can be found on the website www.forfishing.cz.

Historically the largest fishing fair will be held in four exhibition halls in the area of 14 000m². There will be presented 175 exhibitors and represented more than 800 brands of fishing brands. The fair will feature fishing celebrities from all the Europe headed by Jakub Vágner.

In addition to many innovations that exhibitors at the trade fair will show there is also a varied accompanying program prepared for you:

Visitor’s contest for catamaran ONDATRA in the amount of CZK 19,990

Dear visitors, as it has become a habit on our fair FOR FISHING, this year again You would have the opportunity to participate in the contest among visitors. Just come to the fair, fill out questionnaire ticket and throw it into the urn on the stand of BOAT STORE (2A22), or in Entrance Halls I and II. on the information. The contest runs until Sunday 19. 2. 2017 to 14.00. Rules could be found here.

FOR FISHING 2018 - Final Report
Back to Top
Zavřít
Enquiry participation

Thank you for your inquiry.

We will contact you as soon as possible.
For more information, you can also contact us directly at international@abf.cz.

Google serves cookies to analyse traffic to this site. Information about your use of our site is shared with Google for that purpose. See details OK